How I Came to Embrace My Important Role in Judaism

On Saturday, March 10th, 2018, in front of my family and community, I became a bat mitzvah at 33. The service was held in the main sanctuary of our synagogue, and I stood in the exact spot where my husband and I were married a year and a half before. The rabbi who married us and led me through my Jewish conversion sat in the front row, as I delivered my D’var Torah (word of Torah or sermon). Besides our wedding day, never have I felt so enveloped in love by my entire community. 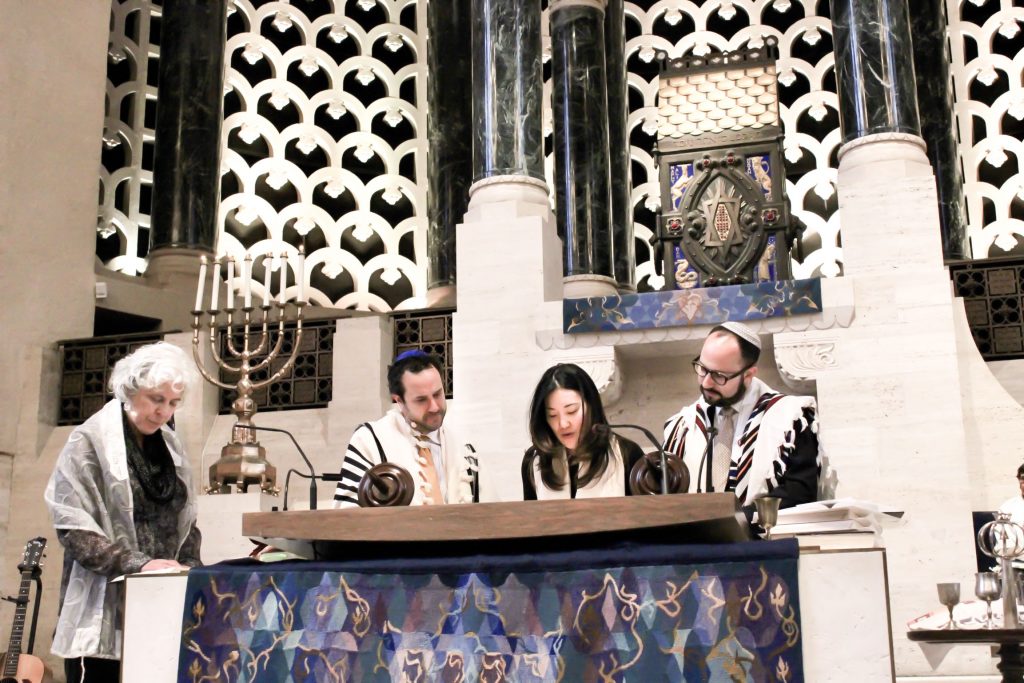 When I converted to Judaism a few years ago, I was (and now proudly am) every bit the stereotypical overzealous convert. I used to feel painfully self-conscious about this. However, during the process of studying for my bat mitzvah, I realized that my role in Judaism is invaluable. As I passionately dove into learning about Judaism as an adult, I became a resource that my Jewish-by-birth family and friends sometimes come to for all things Jewish (another convert stereotype). Being “overzealous” means that us converts often play a very critical role in ensuring that our Jewish cultural traditions and values are imparted to the next generation.

My conversion was just the beginning of my Jewish journey, and I found myself yearning to learn more. I wanted to learn Hebrew, and I wanted to know the stories and reasons behind each and every blessing and song during the Shabbat service. I wanted to know why we bow during some blessings and not others, and so much more.

If I’m being totally honest, I thought that if I knew more, I would be able to blend in more. Our synagogue in San Francisco is as welcoming and Reform as they come, yet I am keenly aware that I look very different than most congregants because I am Japanese-American. It seems ridiculous now to think that studying for my bat mitzvah would somehow make me physically “blend” into a congregation of predominantly White Ashkenazi Jews. Of course, this is not possible and instead, I have come to accept the fact that I stand out. I hope my Japanese-American face makes others who look different feel welcome at my synagogue. I don’t want to blend in anywhere anymore, I want to embrace my unique position.

In the last 18 months of study, I did learn Hebrew and all the things I wanted to know about the Shabbat service. But that’s barely the tip of the iceberg. Like most 13-year-old bar and bat mitzvahs, my bat mitzvah was an important coming of age ceremony. As an adult, it was a public acknowledgement where I felt welcomed again into the Jewish community; this time as a leader. It also happened to be the first time in my adult life when I spoke publicly to a large group of people. I’m starting to feel less self-conscious, because I’m learning that my role in my community is important and valued.

The D’var Torah I selected to speak about was Exodus Chapter 40, in which God commands Moses to anoint Aaron’s sons as priests “for their anointing will be to an everlasting priesthood that will continue throughout their generations.”

Here is an excerpt from my D’Var Torah:
As we raise the next generation of Jews, the way to ensure that our Jewish values are everlasting throughout the generations is by becoming modern storytellers of Torah. Believe me, I get how scary it is to feel like you’re completely butchering a tradition by reinventing it. I do it all the time with my Japanese and Jewish traditions and sometimes I feel like a total fraud. But we are not the first ones to feel this way. After the destruction of the second temple, Judaism was completely reinvented by a small, radical group of innovators. If you are Jewish today, you are the descendants (biological or spiritual) of those innovators. If our descendants are to be Jewish one day, it will be because of innovators like us, even if their Judaism looks nothing like ours today… Once again, we stand at the foot of Sinai looking toward the future, imagining and dreaming of what the world can be.

Kristin Eriko Posner (she/her) is a Japanese American Jew and the founder of Nourish Co., a website that inspires multiethnic people and families to create nourishing new rituals drawn from time-honored wisdom. She does this through her writing, recipe development, and a limited-edition collection of modern heirlooms, all of which explore and celebrate her intersecting identities.

How Choosing Judaism Helped Me Embrace My Black, Bisexual Identity

Can You Convert to Judaism? Yes, and Here Are Five People Who Did.

Becoming a Jew By Choice: 6 Different Stories of Telling Our Families

Living the Queer, Jewish Parent Life I Dreamt of When I Converted

Stay in the know.

Subscribe to 18Doors emails
Change Location
To find awesome listings near you!